Several months ago I boldly proclaimed let the blogging begin as we came out of the closet about being proud parents of a transgender youth AND shared our big dream of using this life experience to raise awareness, increase compassion and create a world full of allies.

Since then, hundreds of you have reached out and signed on to support us … and we’re just getting started! We’ve heard from people all over the country, and last week the contacts started coming from outside the U.S. I get goose bumps thinking of so many huge-hearted people coming together with the common vision and belief that we all matter … and we can all make a difference. I’m excited about the things to come and grateful to already have so many along for the ride.

Today marks the 25th anniversary of National Coming Out Day. This year’s theme is “Coming Out Still Matters.”

As parents of a transgender youth we have experienced coming out “in many ways on many days” and from several perspectives. In celebration of this important day, I am kicking off a series of blog posts which touch on some of these vastly different coming out experiences.

For 15 years we thought our son was our daughter. He went through a process of self-discovery and understanding, not distinguishing right away between his sexual orientation and gender identity. Our son first came out as a lesbian before understanding and coming out as transgender. This eventually led to me and my husband, Vince, coming out as parents and as allies.

Yes, parents come out too. And so do allies.

Our son first came out to us in the summer before tenth grade. Soon afterward, despite years of relentless teasing, bullying and torment at the hands of fellow students because he didn’t “dress like a girl” or “act like a girl” or fit in with their expectations, he bravely came out to his teacher and classmates. In a memoir written for a tenth grade English assignment, our son shared his personal coming out experience at home.

At the time he was presenting as a girl and did not yet understand that he was actually a boy inside a female body. So the essay that follows is what appears to be a young girl, struggling with how to tell her parents that she is a lesbian. Of course we now all know our son is a young man, not a young girl. Reading the essay today, I see so many signs that we never picked up on and references to his gender expression and preferences, which, at the time, we interpreted as signs that he was a lesbian.

We learn and we grow. By sharing, perhaps others will too.

The essay that follows are his words and the experience through his eyes, coming out to his parents.

I’m gay, although it wouldn’t be a total shocker to anyone who found out. I mean, I wore clothes from the boy’s section and my older brother’s hand-me-downs since the time I started choosing what I could wear. Any clothes I received as a present from family members I’d accept graciously like my parents taught me to, but later return. They would usually get replaced with an oversized T-shirt or some pants that would be at least two sizes too big. I did nothing with my hair, just hopped out of the shower, brushed it and headed to school. I never wore makeup, I still don’t now. So pretty much the only thing I did for my “appearance” was shove a couple dryer sheets in my pockets so I’d at least smell nice. And instead of playing with Barbie, I was playing Pokemon or with Legos. At some point in my childhood I truly wondered if I was a boy.

I actually thought my parents already knew I was gay. Fifteen and never had a boyfriend? Not very likely for a straight girl in this generation. I guess I was just a little bit paranoid, but with good reason. My parents did have a past of going through the history on my computer. If they went through the history before I came out to them, they would most likely find:

I think you probably get the gist of what I’m trying to say. My computer history was full of me preparing myself to come out to them. I had been trapped in the closet way too long.

Like I said, I thought they already knew, and that they just didn’t want to ask. That’s totally understandable, not wanting to ask someone if they’re gay. Because, if they were wrong it could kill a teenager’s self-esteem. As it turned out, they actually hadn’t gone through my computer. They could just sort of tell. As most people know, I am a horrible liar, and they could always tell when I lied. When they would ask if I had a boyfriend, I’d reply with “No” in that “Please stop asking that” tone every time. They knew I wasn’t lying to them. I am one of those teenagers who actually doesn’t lie to their parents.

So how the real beginning of this story started was one day this summer. The whole house was candle lit, making a strange mix of all sorts of different smells, because the power had just gone out. There was a crazy storm outside, obviously the cause of the power outage. The wind was so rough outside, all the chairs were knocked down, and even the big umbrella on our table blew off. That umbrella was held down with at least fifteen pounds of metal, plus the table itself. Everything was dead. Cell phone, iPod, laptop, video games, and everything else battery operated. I was practically forced by nature to sit and talk to my parents. Jokingly, my mom said, “So, it’s time for you to tell us your deepest, darkest secrets.” She didn’t know she was actually about to find one out.

I didn’t have the courage to straight up say, “Mom, Dad, I’m a lesbian.” I don’t know why, I was convinced they already knew. So I went with the only other idea I could think of. “Let’s play twenty questions and see if you can figure it out.” Their first question was obvious, “Are you pregnant?” Besides that being what any teenager’s parent would ask first, this was recently after my brother told my parents that his girlfriend was pregnant. The second question was equally obvious. “Are you doing drugs?” My brother is a recovering drug addict, and they knew we were both so alike that they had to check. After many more totally ridiculous questions I responded with a ‘no’ and rolled my eyes every time.

Finally they started getting closer. “Is it about a boy you like?” After I said no once again so blatantly, they seemed like they were starting to get what I wanted to tell them. I could see, even in the candlelight, their eyes told me that the next question was something that would not get the same response. “Is it about a girl you like?” I took a long pause. I felt like I had to say something, anything, but my mouth wouldn’t let me speak. It was like walking out of the dentist’s after getting a tooth pulled, when your entire face is numb from the Novocain. One of my parents decided to put an end to my long, awkward silence and asked, “Honey, do you like girls?” This time I opened my mouth to speak, but then knowing that was the point of this whole conversation, I shut it and just nodded. That was it. I was out.

My dad was raised Roman Catholic, my mom also raised in a Catholic home. I knew that they were no longer religious, only spiritual, but that didn’t make those few seconds between when I nodded and when they spoke to me any less terrifying. Just a few short seconds of waiting felt like hours. What I had just done was going to change my life forever, and I didn’t know whether that change would be good or bad. A whole lot of thoughts ran through my head, the majority of them not pleasant. I sort of came back to Earth once my mom started talking. She was pretty much going off on a speech on how there was “nothing wrong with that,” and that “it’s okay that I liked girls.” I did spend the last several years trying to figure that out, she didn’t need to tell me, but it did comfort me a bit. My dad could see on my face that I had already realized that, and told her she could stop. He said that they would both love me, no matter what, and that I didn’t have to worry about being judged by them. Hearing those words felt like it lifted a stack of bricks off my chest. And suddenly, the power outage and the smell of mixed candles didn’t seem quite as bad.

Do you have a coming out story that you want to share? Feel free to post in the comments below. We’d love to hear from you! To change hearts and minds, we need to keep sharing our stories until every single person feels comfortable being who they are. Coming out still matters. Our stories matter. We all matter. You can read more about the power of the personal story here. 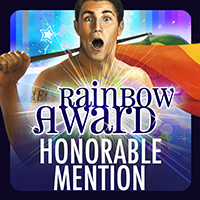 News & Notes: Guess what? Our book, Allies & Angels, recently received Honorable Mention in the 2013 Rainbow Awards! We’re so excited and honored! Want to learn more about our book, check out the Free eBook Campaign, or read a sample chapter? Visit our book’s website: alliesandangels.com